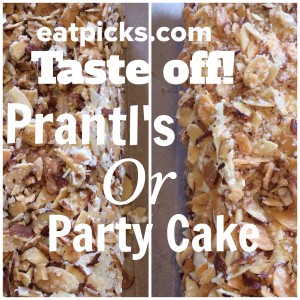 A few weeks ago I was perusing Facebook and came across a post that caught my eye because it mentioned Pittsburgh and hailed Thank You, Pittsburgh, For the Greatest Cake America Has Ever Eaten. As I have family in Pittsburgh, I shared the link from the Huffington Post with my mother-in-law and asked if she was familiar with Prantl’s bakery. She said “yes”, but felt the Party Cake had a far better cake. Since we were going to be in the Burgh the following week to run the Pittsburgh Half Marathon, I suggested we have a taste test between the two to see who in fact could claim the bragging rights of ‘Best Cake’.

We arrived in town, excited to show our four friends the city of Pittsburgh. We were all running the half marathon and looked forward to attending the expo, taking in a Pirate’s game at PNC Park and having them try the infamous Primanti Bros. sandwich and unbeknownst to them, be cake taste testers.

After a fantastic run, we gathered around my In-law’s table to enjoy a delicious meal and recounted our run through the streets of Pittsburgh and the amazing crowd that cheered us from start to finish. This was the first time our friends had experienced this race and the city, so it was great to hear their take on things. I mention this because what better audience to conduct an unbiased taste test than with those from out of town?!

We couldn’t wait for dessert- a true blind taste test- only my mother- in- law and sister- in- law knew which was which. Both Burnt Almond Torte cakes were cut in same-sized squares and placed on matching plates.

One marked with ‘A’ 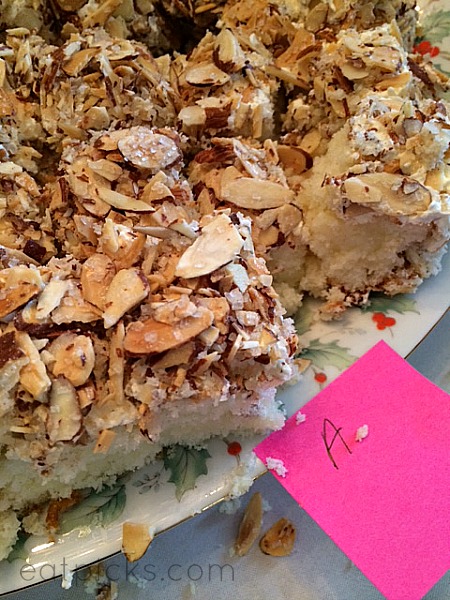 One marked with ‘B’ 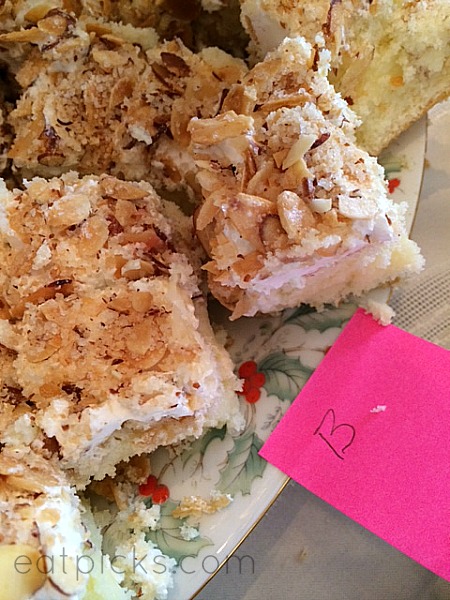 We used paper plates with an A and B side and let the tasting begin!

First I will say that both cakes were delicious. I mean crazy good. I made sure to taste a full bite of cake and topping, just cake, just topping and then a full bite once more. The results:

Cake A’s topping was out of this world- almonds toasted perfectly and covered in a crunchy sugar coating that was to die for. The cake was light and airy yet dense enough to hold up its topping. 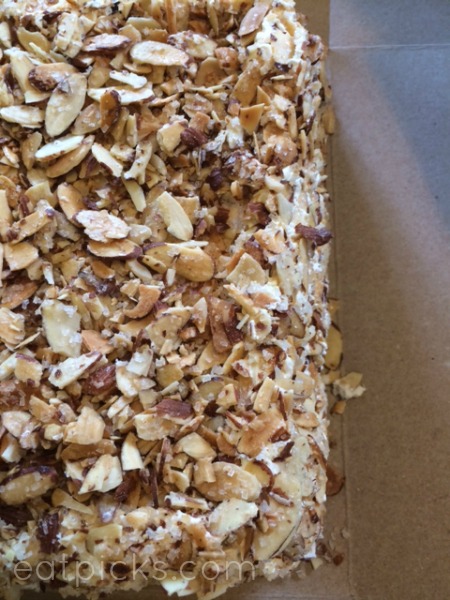 Cake B’s topping was also quite delicious with just the right amount of sweetness with more of a whipped topping and not as sweet as Cake A. However, the cake? The cake was phenomenal; it was so moist, full of delectable almond flavor that each bite was like a cloud of goodness. 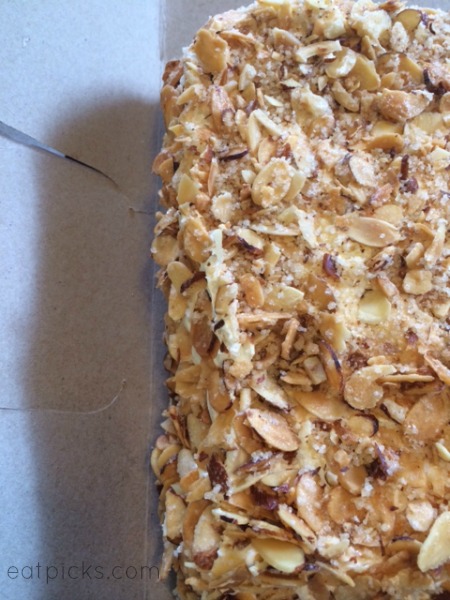 If I could have paired the cake from Cake B, with the topping of Cake A, then I would indeed agree with the article in Huffington Post that Pittsburgh did indeed make the greatest cake in America- however, that is just my opinion. It would be up to the taste testers to reveal their favorite in our blind taste test.

And the numbers did not lie.

With an overwhelming vote of 9 to 3, the winner of the Best Almond Torte Cake in Pittsburgh:

That’s right- Party Cake had the vote, hands down. The 3 votes for Cake A (Prantl’s) was due to the topping- it is that good.

In this instance, Eatpicks grants the honors to Party Cake for Taking the Cake in our taste test!

You can find both on Facebook: Party Cake Facebook and Prantl’s Facebook and both cakes are available for online order to ship to your table. Maybe you can conduct your own taste test to see which one you like better!

[…] And then we welcomed the Pittsburgh crowd after Party Cake Shop shared our Burnt Almond Torte Cake taste test results from our article Is This Pittsburgh Cake Really The Best Cake America Ever Made? […]

Friday Coffee Should Have a Bottomless Pot | Eat Picks

[…] was enough for me, haha. But I am excited to head back and once again, taste test for the answer: Is this Pittsburgh Cake Really the Best Cake America Ever Made? I am willing to take one for the team when it comes to Burnt Almond […]

Hands down and 5 fork rating it IS the best bakery in Pittsburgh!

I wish I had a piece right now to enjoy with my coffee!! :)

This website uses cookies to improve your experience while you navigate through the website. Out of these cookies, the cookies that are categorized as necessary are stored on your browser as they are essential for the working of basic functionalities of the website. We also use third-party cookies that help us analyze and understand how you use this website. These cookies will be stored in your browser only with your consent. You also have the option to opt-out of these cookies. But opting out of some of these cookies may have an effect on your browsing experience.
Necessary Always Enabled
Necessary cookies are absolutely essential for the website to function properly. This category only includes cookies that ensures basic functionalities and security features of the website. These cookies do not store any personal information.
Non-necessary
Any cookies that may not be particularly necessary for the website to function and is used specifically to collect user personal data via analytics, ads, other embedded contents are termed as non-necessary cookies. It is mandatory to procure user consent prior to running these cookies on your website.
SAVE & ACCEPT