We left “Gilligan” in search of a place to have fun. The bouncer was extremely kind to the “early bird” -older-crowd (aka: us!) that showed up at his door. We peeked in and asked if it was open and he said it was. Our next question was how quickly did the tables fill up, because we definitely wanted a table. How sad is this…it was only 6 pm! He said they would probably be full in an hour. We all exchanged looks and said we should go in now and asked if there was a cover. Here is where our new friend won all our hearts….I believe he ducked inside and asked the hostess to let us in without a cover charge. We had our hand stamped and off to a table we went inside “Howl at the Moon.” 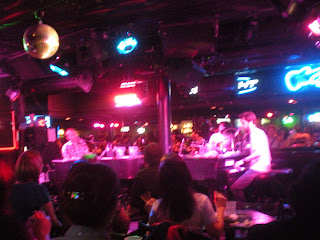 There was a pretty sizable group celebrating a retirement party for a woman named “Feathers”. Now, I have no idea if this was her real name or her “stage” name, but she was referred to this all night long.

Next to Feather’s party was a smaller crowd of all ladies celebrating an 80’s reunion. Who says older folks can’t have fun? We just have to party early! We've learned to like our sleep.

My husband and I had gone to a Howl at the Moon while visiting San Antonio, TX. He surprised me for my 40th birthday by planning the whole trip-(I know. He is awesome!)-we stayed on the River Walk, saw the Alamo and had the best margarita’s I have ever had. Ever! One evening we decided to visit the dueling piano bar to see what it was all about and ended up having so much fun! We were really hoping that it would carry through with Chicago for our friends to enjoy, and it did! The songs were flowing, folks were dancing and the musicians were playing and cracking snarky remarks getting the crowd going. About an hour after we sat down, more musicians joined on stage; In addition to the 2 pianos, there were drums, a bass, guitar, harmonica and even a trumpet! Three guys and two girls-all rotating between instruments. I can say that I was impressed. What a talented group on stage!

What was that bobbing to the beat up on the dance floor? Is that….a…skipper hat?

My husband told us of a legend that had been spotted around town wooing the young ladies with his soft shoe and that he caught a quick glimpse of him at the Oktoberfest while we were chatting with the “Professor”. Seems everyone knows who the dancing Skipper is but can never say where he will show next. As luck should have it.. he was here! I would say put one of his “crew” members in a mix of young ladies, add some music and you have caught yourself a Skipper!

He did not confine himself to just the dance floor either…he made it around the whole bar, like a silent shark, grabbing a hand here and there and pulling in a giggly girl. At one point it got a little creepy because right in front of  our table, we caught a glimpse of his dance moves that went way too low and with a little too much gyration for an 80+ year old guy. I thought he was going to break a hip! He found his way back to the dance floor and to a pretty retiree named Feathers who was now wearing a fuchsia boa and was kicking up her heels as well. That was the last we saw of the Skipper and of Feathers.

I mean, really. Who can resist a man in uniform? Such a smooth operator!