??
The morning greeted us with a downpour and rumbles of thunder. Such a difference from the day before. We decided to make this a shopping day and walk through downtown. We planned for a dinner at Gibsons Steakhouse later that evening and I needed a pair of shoes to go with the outfit I brought.

We walked to Macy's (formally Marshall Fields) to see the famous Tiffany ceiling, 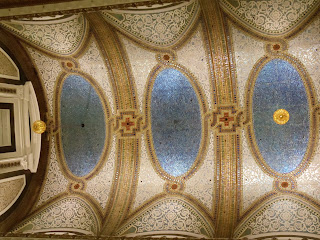 and then made our way through the store, floor by floor all the way up to the Walnut Room. I'm sure if these beautiful wooden panels could talk, they would have wonderful stories to tell. After reading through the information placards, the guys were starting to get antsy, so my friend and I set them free to venture down the way to belly up to the Elephant & Castle while we continued to shop.
Giving ourselves only an hour, with shoes being the focus of this store, we grabbed an elevator and saw this: 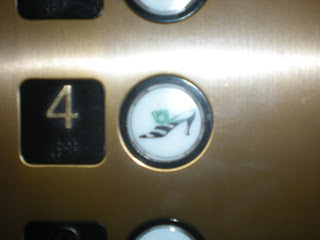 The shoe department had its OWN BUTTON!

We  realized that we were on the express elevator which only traveled to certain floors, shoes not being one of them, believe it or not!

To the escalator we went, as time was ticking. Not sure if the floor we were on was the shoe floor, two older gentlemen sitting in chairs just off the moving stairs quipped “If you are looking for shoes, you are on the right floor! Our wives have been there for over an hour! It's that way.” they both said in unison as they pointed to the left through a pile of bags, which no doubt were handed to them to hold. “Tell them to hurry up if you see them!”

We found our way to the shoes and my, oh my, were there shoes. almost the entire floor! After a quick scan, I found the perfect pair and best of all, only paid $11 smack-a-roos! Deeming this a success, we headed downstairs and across the street to visit one of my fav-or-ite stores, Ann Taylor Loft?. AT's clothes fit me like a glove! Every dress I have ever tried on, I usually buy it because, well, it fits perfect. Cannot beat off the rack shopping. Love it. I was a little disappointed in this visit though, because the dress selection was zero.

We eventually met up with the fellas and had a snack to hold us over until dinner. The E&C was a great place; good food and good beer. 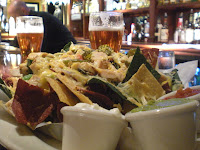 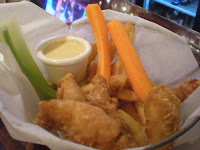 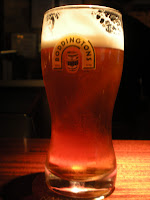 ?
We decided to head back to the hotel to freshen up for dinner. A few hours later, we were all gussied up and in Gibson's. As we settled into our booth, we enjoyed our cocktails and salad. A big white cake passed our table, carefully handled by a waiter and behind him, followed the rest of the wait staff. They all wished a family in the corner a Happy 50th Wedding Anniversary! The couple sitting next to us proclaimed “We have them beat! We are married over 50 years!” So, of course we struck up a conversation with “Mr. & Mrs. Howell.”
He is the owner and head baker of a prominent bread company in the city. He and the missus just spent the day at the Navy Pier celebrating Italian Fest. He asked if we had gone. We replied no, that we shopped down in the “Loop” instead. He told us that was too bad, because they were giving away bread like crazy and it was good stuff. We chatted about visiting and where we were from, and learned that he grew up with and was close friends with the owner of the steakhouse; that his wife's cousin owned another well known establishment: Morton's Steakhouse. He told us stories of the good old days and fun that had him give up drinking: to which his wife said “As you can see, I didn't!” shaking her glass like a dinner bell with a giggle. Can't you just picture Mrs. Howell doing that?? They were gracious when our dinner arrived and bid their farewell.
This is one meal that I did not take a picture of!! I can't believe it! The steaks were out-of-this-world delicious, cooked to perfection. We decided to split the sides: 1 double baked potato and a dish of spinach, broccoli and garlic. I wish you could have seen the potato that was served. It was huge! It was cut in half and then each couple split a half! I could not finish my quarter. I had no idea that potatoes grew this large. WOW.
The only picture of food that night, was rightfully saved for dessert. I thought the potato was big. This thing was mammoth! You know it is one serious, bad-ass chocolate dessert when it comes with a steak knife plunged into the center of it. Look at this thing! 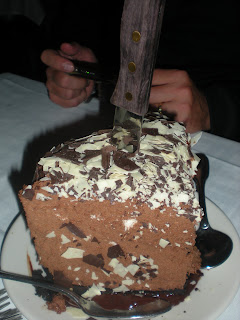 We couldn't finish this either. We saved it for breakfast the next morning! Mmmm!

It turned out to be a beautiful evening. My husband had the idea to go to the Hancock Building to have a night cap. When we arrived in the lounge, it was so ungodly hot. We found a table just behind the tables next to the window. Not the best view, but you could see parts of the cityscape. We ordered from the waitress and then it hit me. The building was swaying. I am not a boat fan because of the motion. In fact, if the kids are fooling around in the back seat, I have to yell at them to stop because the movement of the car makes me sick. The building is built to give and move with the wind. Now mind you, it is only moving inches and to the normal person is probably not even noticed, but to me it felt like yards. Combined with the heat in the room I was getting sick.  I excused myself to the ladies room and found a line, but not to the stalls. It was to take pictures!

This is the view from the ladies room!! 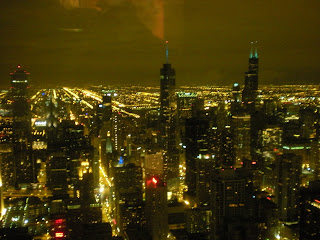 I returned to the table and felt bad to say that I had to leave and that I would meet them downstairs when they finished. They were kind and chose to leave with me. I guess our friend was feeling the same way, so it was fine with them if we found another spot.

We decided to take our nightcap back to the establishment at our hotel.

Here is where we encountered “MaryAnn”. Every boy's favorite, right? She lived up to all expectations. And then some!